Image of the University of Arizona Museum of Art.

WHAT IS MAPPING Q?

Originally envisioned as a way to partner with an existing youth program at the Southern Arizona AIDS Foundation, called Allied Life Links for Youth (ALLY), a suicide prevention program for youth, Mapping Q has grown into its own program where youth are invited to explore identities through language, symbols, and works of art at the museum. It is difficult for me to speak about the value of this program without briefly explaining each of these elements, so let me quickly explain.

Maping Q evolved out of my personal experience as a high school teacher and a sponsor for the school’s Gay Straight Alliance (GSA) club. Working with this high school I was witness to the institutional homophobia that perpetuated the harassment of students who either identify as LGBTQ or whose gender does not confirm to the traditional roles of what it means to be male or female. The hidden curriculum at my school, and society at large, acts to normalize not only heterosexuality but also the degradation of those who do not comply with these traditional sexual and gender roles. This is often referred to as ‘heteronormativity’. To reveal this hidden curriculum the students and I created a large map of the school campus where we invited those in the GSA and other students to map where they experienced any form of harassment or bullying. If we could reveal the institutional heteronormative practices of the school site, I wondered, as a museum educator, could I also create a program that asked youth to reveal the same hidden curriculum at the Museum?

The youth’s artwork made during the Mapping Q program at the UAMA revealed the lived, personal and complicated nature of gender identity through visually intelligent means. For example, two participants, a cis-gender female (identifies with the sex she was labeled with at birth) and the other who identified as transgender decided to collaborate on a piece where their bodies became the subject of the work, titled Where do we begin, the rubble of our sins (Bastille, Pompeii). Lines and dashes drawn in bold colors map the figure’s body, and bold red letters state “censored” across her chest. On the other body, construction tape is wrapped around the figure’s torso. In the museum label the two young artists wrote together, “What does body positivity look like to you? Where are your rivers, mountains, and valleys? What part of your body is still under construction?” As a female, the body can be a site to be critiqued and judged by others. As a person in transition or one who identifies as neither “man” nor “woman”, the body is being metaphorically constructed by the individual. For some the body might be physically re-constructed to match one’s gender. In this collaborative piece, the artists’ personal bodies stand in for the idea of place. Just as spaces can be oppressive or unsafe for LGBTQ identified youth, the body itself is a contested site where one’s presentation of their body often does not match societal expectations. Through Mapping Q, these two young artists were empowered to reclaim the aesthetic norm of what a “male” or “female” should like and communicated that concept through their artwork. 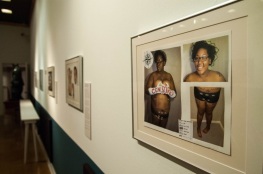 Another element of this exhibition that sought to give agency to the voice of these LGBTQ youth was the display on the museum walls of LGBTQ terms defined by the youth. These terms were chosen by the youth from a list culled from the University’s LGBT Pride Alliance student organization’s Safe Space training guide. Each youth that completed a work of art for the exhibition was asked to choose a term that they identified with and in their own words describe what this term meant for them. This element of the exhibition served as part of the educational programming while also revealing to visitors how knowledgeable these young artists were about their selves and their community. The definitions also revealed the fact that words, especially words that act as labels, are never stable and can have multiple meanings. For example, one participant defined “Queer” as “Non-conforming to traditional societal expectations”. And another defined the same term as “When the things you do don’t fall into the qualities associated with your sex and sexual identity.” Relinquishing our role as the sole provider of information, the Museum’s program Mapping Q provided the space for LGBTQ youth to define their own identities and to speak for themselves.

I feel it is also important to note that the value of this type of programming goes beyond the youth that participated. Through this exhibition we sought to engage our museum visitors in order to spark thinking and conversation about dominant institutional narratives. One way we did this was creating ways for the visitors to engage with the artwork and the museum. One activity included two large glass bowls. One labeled “I feel my identity is regularly represented in museums.” The second with the label, “I find that my identity is not represented enough in museums.” Visitors could place a pom-pom into which glass bowl they identified with. Over the course of the one month exhibition, we had a great deal of participation and it also became visibly and publically clear that our visitors were not seeing themselves represented in museums. 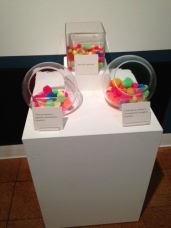 The exhibition content acted as a pedagogical hinge where it provided an opportunity for visitors to engage with unfamiliar subject matter in a safe environment and opened doors to new understandings of the community and of people. Visitor feedback on comment cards directly reflected this. Responses to the question, In what ways does the museum and the museum’s community benefit from exhibitions like this?, included, “[It] Opens minds by presenting a different perspective on gender.”; “Awesomeness! Love! Connection!”; “Integrating LGBTQ youth into exhibitions and projects opens doors for all of us”; and “ [It] opens doorways to ask questions and learn as a whole”. These comments should remind us that programs like Mapping Q can have a significant, positive impact for our communities.

Before museums can reach out to under-served communities like LGBTQ youth, we have to acknowledge that we work in cultural institutions that are part of a system of oppression. Museum exhibitions can naturalize “hetero” coupling and gender expression and thus perform as sites of mass education. The Mapping Q program is incredibly important in that it made the museum become a site for social justice to bloom as the youth were able to challenge dominate hegemonic narratives in the museum as well as institutional heteronormative practices of display, curation, and collection. Through gallery mapping activities, a studio project, and an exhibition of the youth’s artwork, the dominant heteronormative narrative of the art museum was disrupted and new possibilities were created.

Chelsea holds an M.A. in Art Education from the University of Arizona. Chelsea began her career in education as a high school art teacher, teaching studio art, AP Art History and technical theater for seven years. After receiving her masters in museum education, she began at the UAMA first as a graduate assistant, implementing her research in arts integration. Chelsea is currently pursuing a Ph.D. from the University of Arizona with an emphasis on museum education and social justice issues.